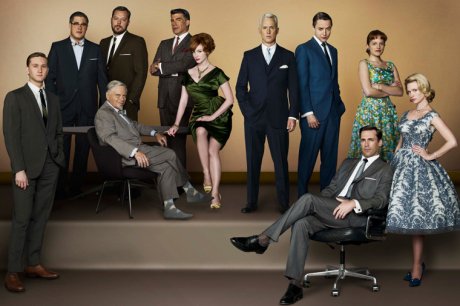 It makes me cranky, but I’ve been out of step for a while now–with the Emmys, the critics,  the cultural zeitgesit, and even my fellow Baconeer:

I tried, I really did. I made it three episodes into the first season and quit in disgust. Since then, I’ve checked in here and there but haven’t been able to see the appeal. Some of the latter is surely that this is not the kind of show you can just drop in on–without the slow build-up across seasons, you can’t experience the payoff. But I don’t want to invest in the slow build-up, because these characters are terrible people. You wouldn’t know if from reading TV Bacon, since I clearly watch way too much TV and then spend time writing about it, but I actually do have a life, and that life is too short to spend time with terrible people.

And yet…the Emmys. The critics. The zeitgeist. Susannah swears up and down that by Season 4 viewers get the payoff of investing in these terrible people when sweeping cultural change kicks them in the teeth. Wouldn’t I like to see these terrible people kicked in the teeth? Yes. Yes, I would.  So here I am, spending some of the summer TV doldrums (what, I’m going to watch Franklin and Bash? Please.) giving Mad Men a second chance.

Turns out maybe I was wrong. Well, sort of. Some of the time. Except when I wasn’t.

Three-quarters of Mad Men (the first season, anyway) is a pretty great show. The excellent craftsmanship has always been obvious–it’s beautifully designed, brilliantly costumed, tightly written, and, for the most part, competently acted. The closing shot of the pilot, framed like a period ad, is genius. That’s contributed to my previous irritation, actually–that something so lovingly and brilliantly made could at the same time be so offputting. There’s just so much reveling in white male privilege, to the point where the show almost seems to enjoy it. (And when you consider Sal and Carol, it’s really about reveling in straight white male privilege.)  “Almost” is key, though. In this better chunk of Mad Men, the show is actually gently puncturing the privilege. There’s almost always someone higher up the food chain who undercuts the male characters’ choices, and even the most privileged characters often don’t get what they want. The first time I tried to watch, I was so uncomfortable that I missed most of the humor. But as long as the show is employing a biting (if often subtle) wit, it’s an exploration of (straight) white male privilege that’s aware of the privilege itself. That doesn’t always make Mad Men fun, but it definitely makes it chewy.

The problem, of course, is that almost every show ever has in one way or another been an exploration of straight white male privilege, and who needs to see that again? The inferior quarter of the season is devoted to tenderly caressing the brows of the point-of-view characters who have everything but are still empty inside. They’re a weird amalgam of Marx and Rand, alienated from their labors by the fact that they make nothing and sell nothing but desire, yet somehow burdened by their gallons of expensive alcohol and fine suits and large suburban homes. They drink all the cream and eat all the butter (literally, in artery-clogged Roger’s case), and yet they’re giant open wounds of want. To which I can only reply: You may go directly to Hell. You may not pass Go, you may not collect $200.

Wah! I have a high-paying job and a beautiful wife and children and a huge house and dinner on the range, but that other woman won’t make out with me! Wah! Shut up and eat your bacon and egg sandwich already. The idea that these men who are crushing everyone around them under the weight of their privilege should be pitied because while they’ve been everywhere they haven’t been to them is just excruciating, and when it’s not undercut by knowing humor it’s next to impossible to watch. As I sat gritting my teeth through that grueling third episode, “The Marriage of Figaro,” it all started coming back to me–I quit the first time around for a reason. Luckily, the summer rewind structure allowed me to zip right along, because the next episode, “New Amsterdam,” is one of the best of the season at using sly wit to puncture the oppressive privilege saturating the story. But with such short seasons, a quarter of the episodes being weighed down with asking us to dredge up such distasteful sympathies feels like a lot.

Interestingly, the tribulations of these swingingest of Dicks are linked to a wail that typically comes from mean girls: they’re unhappy because they’re not real. They can succeed at the advertising game because being empty allows them to make empty things, but nothing can satisfy the big empty inside because they aren’t being true to their real desires. But unlike the female and minority characters, the structure of the male characters’ privilege is such that their emptiness is entirely of their own making. Since they chose it, why is this lack of authenticity so crippling? Why is sleeping with a downtown artist more real than sleeping with a suburban housewife? Drink some cream and get over yourselves, gentlemen. And why is this lack of authenticity constructed as a bad thing for everyone? Dick Whitman had a terrible life–why shouldn’t Don Draper enjoy the life he created instead? Why am I being asked to sympathize with people who are black holes of want even when they have everything and seem entirely unconcerned with the fact that others have little?

And yet…that’s only one quarter of the episodes. The majority of the season really does peel back and expose the privilege, and it is so much funnier than I remembered to boot. The distasteful stuff is just so distasteful. Still, I embarked on this experiment assured that if I invested the time, I’d get the payoff, even if that payoff takes four seasons to come. I’m interested in seeing more of the parts of Mad Men I’m liking, and I’m interested in seeing the 1960s roll right over the parts I don’t. I’ll never–never–understand Peggy and Pete, but are lawnmowers and floor wax enough to get all this dairy out of my system?